Kyiv’17 will be his second Eurovision attempt. His first was also in Ukraine, when we met him representing his country, Slovenia with the song ‘Stop‘. Now it’s the time of another song composed by himself, ‘On my way‘; harder to sing and containing a very emotional message inside. Eurobloc has got the chance to make an interview to Omar Naber, who will sing in the first Eurovision Semifinal, next May the 9th.

Eurobloc.- How did your Eurovision 2017 project start? Was ‘On my way’ born specially for EMA?

Omar Naber.- No actually, it was not written specifically with EMA or Eurovision in mind.  It was written several years ago and something I kept coming back to from time to time. It was only after discussion with friends last year that the potential for the song in EMA/Eurovision became clearer.  I was not approached to enter EMA on this occasion as I had been in other years. So I submitted the song directly myself and was very pleased that it was accepted to EMA. 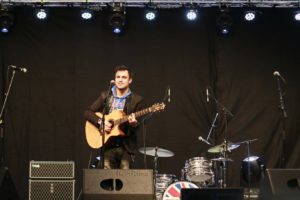 Eb.- About the song and its lyrics; quite forceful message! Is it related to a personal experience? How was the song born?

ON.- Well, it’s about my personal experience, when I was lost, lonely and had no path ahead. But I always knew I’ll find a way and that there is always a light somewhere ahead even if we don’t see it sometimes. I first wrote it several years ago and did not really have a place for it at the time, either on an album or for use in some situation. But I kept returning to it and last year having discussed it with some friends, I decided it could be a perfect track for Eurovision. It is very traditional in the sense of the Eurovision ballad style and when my friend Žiga Pirnat, who is a very talented music composer and arranger, suggested the orchestral arrangement, I knew that the song had become something special.

Eb.- Which kind of performance are you planning for Kyiv? Some changes in comparison to EMA?

ON.- There may be some subtle changes in presentation and styling. The song is one which needs minimal but effective staging and it will be my aim to deliver the message as best I can to connect with the audience in the venue as well as both juries and the wide, diverse television audience. I hope they’ll like and get a sense of the song’s message in my performance.

Eb.- As an artist; which are the differences between the Omar Naber we met in Kyiv in 2005 and the current Omar Naber in 2017?

ON.- I am far more mature, responsible, trustworthy and do not take that kind of opportunity for granted. I was very young back then and I don’t think I was entirely aware of the responsibility Slovenia put on my shoulders. Today, I embrace and cherish it completely.

Eb.- Let’s compare ‘Stop’ and ‘On my way’… Which one do you think requires a better vocal technique? Does ‘On my way’ reflect a major challenge for you as a singer?

ON.- Both songs are quite hard to sing, but I would say ’On my way’ is even harder, as it carries a heavy personal message of sadness, weakness and a glance of hope within, it is a very emotional song and I really had to give it my best to pull it off.

Eb.- Twice in the Contest but you tried it three more times in Slovenia and once in Switzerland; what does the Eurovision Song Contest represent in your career? Which are the incentives of the ESC for you as an artist?

ON.- It is a great extravaganza – a gathering of the countries of Europe (and beyond) for a fun competition to celebrate music and an opportunity to present yourself, your music and your country to a wide international audience. Eurovision is an important part of my life. It has brought my music to a wider international audience and afforded me the opportunity to travel to many interesting places and meet some great people. And now it presents this opportunity again.