“Foreigners and stateless people are only allowed to enter and to get out from the temporary occupied territory of Crimea with an special permission from the proper authorities sited at the border checkpoints“. This is an Order issued by the Ukrainian Cabinet of Ministers last June, 4th 2015. It also adds that anyone violating the Order will have to face responsabilities on it, such as being banned from entering Ukraine. The Order is prior to Samoylova affair, which is not still closed: Ukraine invites Russia to take part in the Eurovision Song Contest 2017 but with any artist who has not violated the country’s Law, while Russians and the European Broadcasting Union require the Ukrainian Government to cancel the ban on the singer. There are only 29 days left for the second Semi-final of the Contest, where Russia has been allocated. Eurobloc has made an interview to the Ukraine’s General Consul in Barcelona, Mrs. Oksana Dramaretska, who was born in Kyiv and who graduated in Internation Law at the State University Taras Shevchenko in Kyiv.

Eurobloc.- What do you think about the pressing on your Government to allow Yulia Samoylova enter in Ukraine?

Otsana Dramaretska.- She entered in Crimea illegally. She violated our Law and that is why she is automatically applied the Law. Any person who visited the territories temporarily occupied in a way which is not stablished by Legislation, will be punished. We did the same with some members of the French Parliament. The status of a participant in the Eurovision Song Contest, is a kind of immunity for that kind of actions? She violated the Law, she is banned! By the way, they knew from the beginning she was not eligible to participate in the Contest because she was persona non grata since the then!

Eb.- For example, any person who wanted to visit Crimea, how must they proceed?

OD.- You must apply for an special permission to the Ukrainian authorities and come to Crimea through our checkpoints in the Ukrainian side. If you do it otherwise, you will be punished for that. It is a crime. It is the Criminal Code which stablishes responsabilities for these acts. That is why you are declared persona non grata. 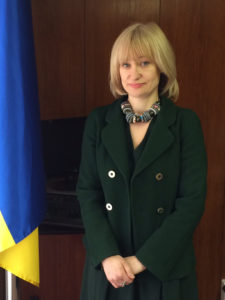 Eb.- In this particular case, there are people who wanted to spread the idea of Ukraine acting in an inhuman way for banning a handicapped person…

OD.- She is a normal person, like you and me. She violated the Law, so she is punished for that. Some days ago, some members of the Serbian Parliament were also punished as they entered the territory of Crimea by the same way, and they were also declared persona non grata. Why apply the Law to the members of the Serbian Parliament and why not doing it to this particular lady? Because of some kind of Eurovision immunity? They knew it since the beginning! It is a pity the Russian side is using this girl for this kind of games; it is completely unfair. Why to put her in this position? Her disability… she is a normal person like everybody else, so she has to respond for her actions.

Eb.- What about if Ukraine allowed Samoylova to get in the country?

OD.- We would be saying the world to get illegally in Crimea is not a big deal; you can break the Law.

Eb.- We still do not know if Russia will take part in Kyiv’17…

Eb.- Before the Samoylova affair, many people criticized that Ukraine made some ‘black list’ of people who could not get in the country…

OD.- Because they were people who violated the same Order, so they are persona non grata. If you would do the same, you would be in the same list; journalists, membres of the French Parliament, of the Serbian Parliament or whoever! They are banned for three years from entering Ukraine. 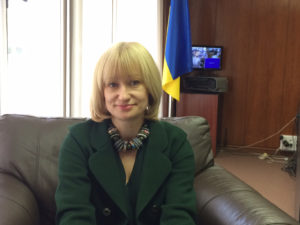 Eb.- Do you think this affaire can be the origin of a diplomatic conflict between Ukraine and the European Union?

OD.- I do not think so! I do not see any problem with this. It is our Law; this is not the United Nations Headquarters!

Eb.- What would you tell people being afraid of safety items in Kyiv?

OD.- There is no any safety problem in Kyiv! There is nothing to be afraid of! The conflict is in other parts of Ukraine. Kyiv is a completely safe city; has got experience in international events and will post resources to control people’s safety. We have also organized the 2005 Contest. We have had the European football Championship in 2012. For us, it is not a new item to organize this kind of events. Just few days before the Eurovision, we will have the World Ice Hockey Championship in the Sports Palace. Kyiv is a very present city in such events; local authorities know how to proceed and everything will be OK.

Eb.- What would you recommend fans that they cannot miss in Kyiv?

OD.- Kyiv is a very large city! The city center is quite different from the riverside where the Eurovision will be held; in the center, we do have old buildings. You can visit Lavra (the Cave Monastery) Or Maidan!; now this place is related to the Revolution of Dignity in 2013, so it is very interesting to visit it; is the place where some guys died; they were killed, so they still are honoured; it is very impressive and it is worth visiting it during your stay in Kyiv. There are lots of things to see in Kyiv; it is a beautiful and a very old city; many historical places, a lot of nice restaurants; delicious Ukrainian food… The Dnipro river is marvelous and both banks will be connected by boats! So it is worth to go there and participate in this event. The left bank of the river is more modern; it is completely new, for example, the International Exhibition Center is a completely new and a very huge and big building. We hope the weather will be fine!