This is not the first time the family name ‘Faniello‘ will represent Malta in the Eurovision Song Contest. In 2017, it’s the turn of Claudia, after winning the last Malta Song for Europe in her ninth attemp to sing in the famous European Contest since 2006. She has also sung with the Malta’s National Orchestra. Claudia Faniello releades her first album in 2010; ‘Convingcingly better‘. Its track #7, ‘Samsara‘, finished the eighth out of 20 in the National Selection for Oslo’10.

Eurobloc.- Claudia, if you were talking to an audience who still has not listened to it, how would you define your song ‘Breathlessly’?

Claudia Faniello.- An emotional trip which will leave you breathless.

Eb.- How did your Eurovision 2017 project begin? Was it your idea to try it again?

CF.- I was tricked by the song writers to go to their studio to discuss other projects and I was caught by surprise when they played ‘Breathlessly‘. It has immediately toughed my heart and I instantly knew this was my come back to the festival.

Eb.- After several participations in the Malta Song Contest in a row, you did not take part in it in the last 3 years. Was it because you needed some rest from this Contest or simply you had not the appropriate song for it?

CF.- I have taken a break in order to focus and mature both artistically and personally. 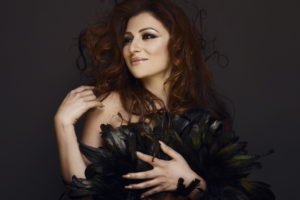 Eb.- What can you tell us about your performance in Kyiv?

CF.- It will be simple, emotional and authentic.

Eb.- Do you pay attention to professional bets and fan’s opinion in Eurovision forums?

CF.- I do respect that everyone has the right for his opinion. However in such a delicate phase of preparation I would rather focus on my performance which is now behind the door.

Eb.- Which advices has given your brother Fabrizio to you before you take part in the Eurovision?

CF.- Enjoy the ride and cherish this experience.

Eb.- Have you already listened the other Eurovision 2017 songs? Apart from Malta’s song, which are your favourites?

CF.- I have listened to a large number of songs, however it is very hard for me to narrow them down to my favourites.

IMRI: “My performance in Kyiv is going to be really amazing!”